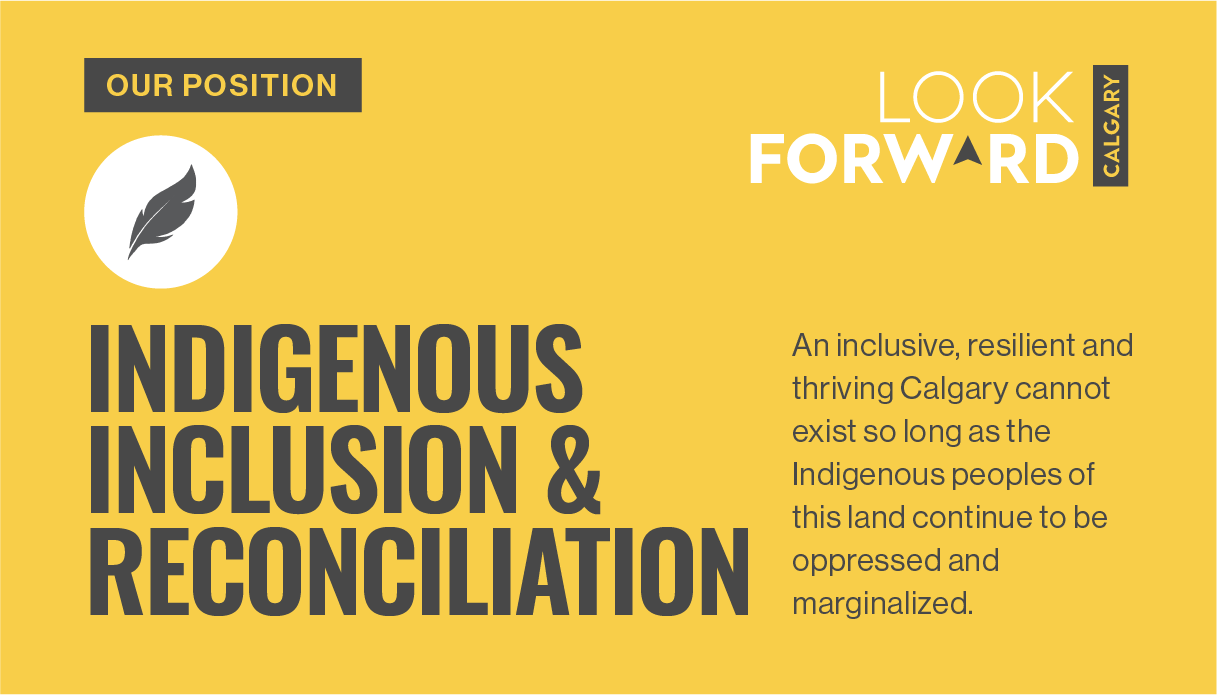 Look Forward Calgary is dedicated to the vision of an inclusive, resilient, and thriving Calgary. Such a Calgary cannot exist without reconciliation, and it cannot exist so long as the Indigenous peoples of this land continue to be oppressed and marginalized. We are a small not for profit organization, but Calgary is a wealthy city of almost one-and-a-half million people. We call on the City of Calgary to use the resources, authority, and reach at its disposal.

Calgary has Indigenous-led strategy and policy in place. Since 1979, Indigenous issues and concerns have been represented by CAUAC, the Calgary Aboriginal Urban Affairs Committee (originally called the Native Urban Affairs Committee), a body of 12-14 people which must always be majority-Indigenous. In 2015, following the release of the 94 calls to action of the Truth and Reconciliation Commission, City Council asked CAUAC to prepare a report on applying the TRC findings to the Calgary context, the White Goose Flying Report, issued in 2016. Since then, CAUAC and City Administration have produced an Indigenous Policy Framework and an Indigenous Policy (adopted in 2017), and supported the establishment of an Indigenous Relations Office (IRO), and its budget (2018). A fulsome and meaningful engagement process for IRO was carried out in 2019. These are important actions.

However, these efforts fall under the umbrella of Community Strategies, one of the smallest items in Calgary’s city budget at roughly 1/8 of 1% of the total budget (City of Calgary 2021 Mid-Cycle Adjustments Capital and Operating Schedule). Community Strategies is responsible for not only CAUAC, White Goose Flying, and IRO, but also Enough for All (Calgary’s anti-poverty strategy), the Seniors Age Friendly Strategy, the Social Wellbeing Advisory Committee, and the Calgary Local Immigration Partnership among others. Further, the Community Strategies budget has been reduced 20% since 2018. This fits a chronic pattern in Calgary of developing and passing ambitious, forward-looking strategy and policy, and then failing to properly fund or resource its implementation.

The City of Calgary must fully implement the recommendations of the White Goose Flying report, and must continue to actively pursue reconciliation and decolonization. This includes fully funding and resourcing IRO and CAUAC, and reviewing and updating these bodies and all related strategy, policy, resourcing, and funding on an ongoing basis. All such efforts must be trauma-informed, led by or co-led with Indigenous people, and fulfill the Truth and Reconciliation Commission calls to action. As a city, we must do better.